View cart “Roth’s™ 101 Pinstriping Ideas” has been added to your cart.

For five decades, mystery surrounded the identity of MontÃ©, the reclusive master of cartoon monster decals. Now, the remarkable and poignant story of Don “MontÃ©” Monteverde — from his early roots pinstriping cars and motorcycles in Los Angeles to his eventual rise and fall as America’s decal king — is revealed, including the revelation that MontÃ©, not Ed “Big Daddy” Roth, was the hand behind the creation of the iconic Rat Fink.

Often imitated but never surpassed, by 1964 MontÃ© had turned his back on pop culture, eventually reinventing himself as a consummate stained glass craftsman. The book explains Monte’s process and overflows with hundreds of full-color examples of his work: retro eye- candy guaranteed to raise a smile and satisfy even the most hard-core Kustom Kulture retro Jones. There’s even a reproduction bonus pack of Monte decals included!

There are no reviews yet.

Only logged in customers who have purchased this product may leave a review. 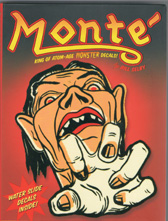